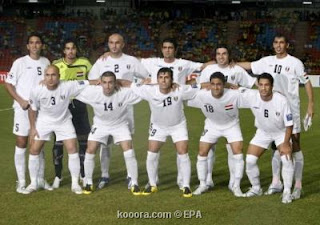 In tribute to the Iraqi football team, this post is written. I can only do as much for they made a whole nation happy. They helped giving us joy! yesterday they went to Iraq to celebrate the win there... The captin, Yunis, said he'd go running with the cup in Iraq and if he died, it didn't matter!!! no comment from my side on what he said!

Nasha'at, Truly azazing!
Noor, the goal keeper... I love him
Qousay, I adore the way he looks...
Jasem, He's too good
Ali rehema, from his looks you can see his determination
Yunis, our capitan... He deserves to be the captain because there's no one to top him
Haidar, don't let his skinny look deceive you
Hawar, the bomb of the team
Basem, there's this cute similarity between him and Jasem
Mahdi, like the rest of them, he's just azazing
karrar, he's really energetic
Ali, even though he came at the end he did a great job and nearly goaled
saleh, he suffered from an injury so he couldn't play at the final match but he rocks

It's all just surreal... But maybe it's more than just a cup. They made millions of people happy! May it last forever! :D

PS: I couldn't find a better picture so these aren't exactly the players that played at the final match but well, most of them did!
by Noor @ 6:21 PM

I still remember (yeah, yeah - I'm quite the Olympics-obsessed person) the opening ceremony of Athens 2004. During the athletes' parade, Iraq was announced. It was a small group (football, actually), and they still got the biggest ovation in the stadium. Very moving.