One in a million - Bosson

"You're one in a million
You're once in a lifetime
You made me discover all the stars above us"
I have to admit that this song is a sweet song that has a nice beat. It must be sweet if someone you love dedicated the song for you but since I am nothing like others and my brain functions differently...
Here are my very first thoughts on the song:
This is a song that a lover would dedicate to his/her lover because of how much they mean to each other. If someone is one in a million, that means there is 6000 person out there like him/her. It is simple maths, there's 1000 million in a billion. So you do the maths. I already did them myself. Imagine telling someone you love there is 6000 version of him/her. I'd have been offended. If the "m" in "million" would be replaced by a "b" that would've been more acceptable for some. It'd mean there is only 6 versions of you in the world. If indeed we are still only 6 billions.

I like to think that there is no one out there like me, because let's face it, there isn't. So they might want to put more thought in their songs... Which is more mportant, your intentions? Or the way you translate them into actions? I understand that when they (s/he??) wrote the song they meant something good because they wanted to express how much a person means to them. They ended up sending the wrong message to me.
by Noor @ 11:48 AM 2 comments:

Email ThisBlogThis!Share to TwitterShare to FacebookShare to Pinterest
Labels: songs

Let's talk career options, I am dying to find a career line that fits me and my abilities but none seems to be what I end up with. Let me put my thoughts on paper, uhh this is not a paper but that is not the point!

Every time I think about things I can do, I end up finding a big flaw in each. I will narrow the search down.

A writer, as much as the idea sounds tempting I don't see myself as a writer. It is not for me and I have embraced that fact. It is no longer an option. It is more of a hobby.

A journalist, telling the truth like it is and spreading it to the masses. Sounds very big but again spending my life searching for the truth in that way doesn't seem so tempting. I imagine I would not survive in that world.

A dentist, as much as I want my teeth fixed I don't want to be the one who fixes them. I hate seeing a loose tooth, and that is the least I would probably see when I become a dentist. (I can't deny the fact that it is still a valid option)

An engineer, my mom and sister have killed every wish to become one. It is too hard. I am glad it isn't an option.

A teacher, I love little kids and well, if I became old -which I am sure someday it will happen- I imagine I would also like big kids (meaning teenagers) but I am afraid I simply lack enough patience to teach.

A pharmacist, I am not too keen on the idea because I feel like it is, somehow not what I was meant to do. But what is it that I am meant to do really? I am drifting from the topic....

A lawyer, very fun to practise and say "Objection your honor" but again as my friend said once, it is hard to work as a lawyer here. My job is to watch shows like "Alley Macbeal" on TV.

A politician, a great way to be in charge but it's not my version of changing the world.

A social worker, I don't think I can do that... I'd rather work for UNICEF or a similar organization but do tell me what do these people major in!!!

A doctor, notice it is the last one on the list so that is a big option. Don't get me wrong, it's not my dream to become a doctor because I hate seeing blood, cuts, wounds, and people dying and such. I'd crack under such pressure but it is a really big option.

Sad part, is that now my options are very limited and there isn't one that I am really attracted to. I want to find my dream and go after it to achieve it than having to enter an college that is thought to be best for me. *sigh*

Good part, is that I still have almost three years to ponder upon my career line.
by Noor @ 11:19 AM 7 comments:

I believe in the last post I sounded more upset than I was, thus perhaps the term "who met his/her end with no reasonable reason" was some how irrational. I believe strongly that everything happens for a reason. Let me clarify it a little bit. I meant that these people who are dying, their lives are being taken for reasons that could've been stopped!
Or maybe for reasons that are merely hard for a person like me to comprehend which is why I said that. Nevertheless, it was doing them great injustice since their lives are a powerful reason that makes me strive to change this world.

I would like to thank Waed for putting light into that point, Victoria for providing links for Mafalda, and Jenny for being supportive and all of you for your encouragement. I do feel like Mafalda a bit... Here's a picture I found that I really looooooooooooove! 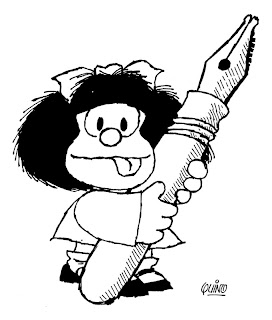 I WILL CHANGE THIS WORLD!

You feel for the dog who got killed at it's (excuse the 'it' but I don't know know whether it was a he or a she) hair dresser.

The dog had a hair dresser and it died when it was there. It's death caused a TV show to air the story along with bizarre stories (of course numerous stories of these included celebrities).
I am sorry to hear the dog died, but it can not be compared to the death of a person I'll never meet who met his/her end with no reasonable reason.
I recall a discussion regarding what stories the media decides to give more mintues on TV... The media is only showing what they think would interest us, what would keep us haunting these news, the extravagant wedding of this actress is more "appealing" to us than seeing somebody poor. Why do we care more about knowing what's going in the glamorous world then in the real world?? We are bored of hearing the death of a dozen people in a car bomb. We want to hear the details of the large life we will never live but we would die to experince a day of it.
They would give more minutes for a dog who died than a person who couldn't find water or food enough to get them through this day... Hold on a second please, you consider that a normal death. They just died, no one killed them!
Let us take a closer look at this: They died because their government thinks it is better to keep their mouths shut on those who are robbing their money because they do not want more trouble... Their people are already facing poverty, they are in deep trouble!
They are dying because no one is helping them, they are dying because politicians are more worried over their image so they are donating to "their" charity programme, they are too much conceited in their campaign.
They are dying because you and me are enjoying our summer and we feel like we can not do a thing. That thought makes you sleep at night!
Excuse the bitterness my words express but I feel it is somehow my fault too. They are dying because someone thinks their ideas must be forced not only seen taking place, they want them implanted in people's minds.
So does that still fall into the category of dying a "normal" death? There are million of other deaths which people can not be considered as dying "a normal death" and still they are being called that!
I do feel a bit of a hypocrite, here I am not feeling the heat of the summer because my AC is working and people can not even find a piece of anything to keep the sun's light from making them more dizzy than they already are.
This is only a desperate attempt to make me feel that at least, unlike you I care more. It is not working but well, laugh it off... You are not feeling guilty, you do not care! Somehow that makes you feel better, you are living your life care-free.

PS: I do care for animals but let us face it. I do not care if I sounded cold hearted at first but I can not help feeling this way and I am anti-pleasing people today so it is what I feel... People are dying for God's sake!
This "you" in the above lines aren't for you, I know you care as much as I do or probably even more. It is for those who might not even read this ever but I had to give this a shot.
by Noor @ 2:42 AM 6 comments:

I have been touched. Not by the inspiring story on Oprah today, nor by this day which was some how a frustrating day. I have been touched and it is because hope is roaming somewhere inside. Time is no big deal, do not rush into things and do not feel desperate quickly. Things certainly can switch even though it might also be a slow process but what does that matter as long as it happens?
You must be wondering what am I talking about? And to clear such a thing I must tell you what just happened. I didn’t meet my prince charming nor did my long waited dream come true. I just finished watching ‘The lake house’.
I know, it is probably just the rush of the moment. I mean it hasn’t been more than 10 minutes since the movie ended but as much as it made me agitated that they wouldn’t wind up together, as much as now I am full with some sort of trust in destiny.
He waited two years for her, please take note of the two years. It means he wanted it enough. He didn’t give up and so should everyone do. We need to have enough faith in what might come. If you didn’t go to watch ‘ocean’s 13’ you’ll get to see it next week. I should replace the ‘you’ with ‘I’ because that was what happened to me.
Very thoughtful of me I know. But I am filled with hope and believe me today isn’t the best day of my life. I woke up disappointed without no apparent reason, nothing interesting was on TV. When I tried coming online my msn wouldn’t open and any other site wouldn’t as well. Anyways it is not such a bad day after all. I was patient enough to go through it all, I didn’t nag or whine. Look how it ended.
I got to add one movie to my favorites and that is only the least I can say about it.
And Huda like I said in the movie ‘Don’t make fun of me’ although somehow it is different to the reason I said it while we were watching the movie.
by Noor @ 1:30 PM 2 comments: