Waltz the Night Away*

So I've had quite a nice night today, which is awesome really. I didn't think I'd be in such a care-free mood a few days away from school. It's been listening to Rotana, which got some really nice old songs I used to listen to, and it's been great. And the chocolate I had, along with the laban! It's been great.
However, what made it awesome was reading the book my friend gave me. It's a nice break from the long classic stuff I've been reading lately, I just started last night and got to fairly more than half way through it, but it's short and very interesting.
Anyways, I was watching video clips, or at least that was what the channel was putting, I put it for the music, and as I saw some classy songs and not so classy ones, I realized that a video clip doesn't need girls dancing on the beach or something so tacky, you could definitely have a classy video clip that actually people liked. Here's an example of a video that I love of a song that is one of my all time favs:

Hm had to share that. So I've had a nice night, and this was just what I needed to get my spirits up about school and the whole thing. Hope everyone is having great days, truly!
Much love

Sherlock Holmes: The Complete Novels and Stories - Volume I I just finished this book last night, I managed to finish it before school started so that's great.
It was my first time reading Sherlock Holmes, and it was a lot since this book has a lot of stories, but it was really entertaining and interesting. I'm glad I finally have read Sherlock Holmes, and I'd recommend you to read this book, it's a great edition and how they've put together all these stories. I might wanna suggest that you take it slow, like read it slower than I did. Maybe when you get to the stories, start another book or something.
However, I don't regret reading it all together. I think Sir Arthur Conan Doyle is brilliant, the character of Holmes couldn't have been more perfect, and I simple looove Dr. Watson!
Will be waiting to read Volume II of it, but I can definitely wait.
by Noor @ 3:12 PM No comments:

Email ThisBlogThis!Share to TwitterShare to FacebookShare to Pinterest
Labels: books 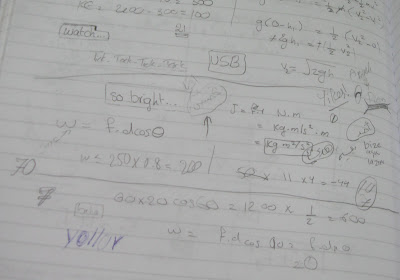 Doodles while doing Physics problems. My doodles suck really, but hey! They get me through boring times. :D 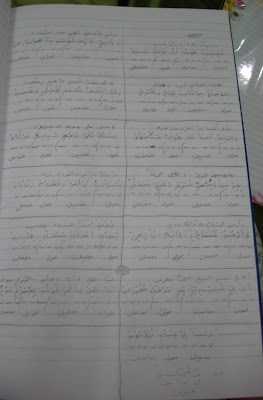 I love this one, doing 3araooth for Arabic, how neat it all looks. It's not the case always, it's usually a big mess while I practice anything for school, but this one is simply too neat.

PS: photos taken today, but I've done these last year when I was studying for exams.
by Noor @ 12:55 AM 3 comments:

So it's Eid. And although it hasn't been much, it is nice!
Ramadan is over, and so are the million tv shows they did for it this year, but hey! They're probably starting to make more for next Ramadan. The tv shows are quite good, but it's a shame they're only showed during Ramadan (yes, there are re-runs afterwards, but it goes on for the rest of the year until next Ramadan, in that time between them there's nothing new).
It's like they made Ramadan become about what tv shows and such, it's really not good.

I didn't watch any tv show regularly this Ramadan, but I saw episodes of a few of them. They were good. I just need to vent on 2 facts they don't notice, (they = the makers of the tv shows).
1. A show can be successful without having the lead character a woman who's had to struggle all her life, and she's an angel at heart, but the whole world seems to be against her. Seriously! You can get more creative than that.
2. Endings don't have to be either so devastatingly sad, or to happy endings with everyone either getting married, finding the love of their lives or making up with the one they love. Rise above such cliches, I don't mind happy endings, in fact I love that. I just need them to be believable!! It's not too much to ask, is it?!

Anyhow, I simply need to share these ads as they're UNBELIEVABLE hilarious.


Gotta love Ahmed Mekky. Those were my fav Ramadan ads!!!! :D
Hope everyone had an awesome Eid, or is enjoying their time! Love
by Noor @ 2:33 AM 1 comment:

I have to wake up early tomorrow, but I just need to post about this or else I'd forget.

While reading, you find yourselves sometimes so interested in the book you're reading that you hardly notice what's happening around you, or what people are saying and such. I interact with what I read, I laugh out loud, giggle and show my emotions while reading. That's not what I wanna say though...

I was just reading Sherlock Holmes: The Complete Novels and Stories, and I came upon this line just now:
"Thank you," said Holmes, shutting his eyes; "pray go on." Page 707

I also tried to imitate what Holmes did, I shut my eyes and imagined myself saying "pray go on." This happens quite often with me while reading. Shrugging my shoulders, covering my mouth with my hand in shock, raising an eyebrow, nodding, shaking my head, etc. It's a curious thing when you catch yourself in the act. Trying to do what one of the characters did, or how they reacted. I just love it! I think it's quite fun to do so...

Email ThisBlogThis!Share to TwitterShare to FacebookShare to Pinterest
Labels: books

I know I haven't been blogging in a while but life's been pretty hectic here, and as I have school less than two weeks away, I though I'd blog away...!

So in these past few weeks I've been kind of sick. I've got an infection in my lungs, but don't get worked up folks, I'm fine alhamdulliah! I got X-Rays, a CT, a lot of blood tests, and stayed for about 5 days in the hospital which was because they wanted to know the cause of the infection (which until this date has not been known! Seriously, you'd think with all the tests they took they'd be able to track that down, but anyways! My cough got better so I'm not complaining). My stay at the hospital wasn't very pleasant, but as my mom stayed with me and my family were there I was comforted they're there. Plus I had a book with me to get me through it, I've read like over 600 pages of Sherlock Holmes while I was there!! Too much for my first Holmes experience but it's been very entertaining!
The most annoying part was the endoscopy I had. That was a total drag, they said I wouldn't feel a thing (which was true that I didn't feel the tube they got in me) but I did feel my throat stiffen to a really uncomfortable point. Not pretty! But it wasn't too bad. Actually, I think I'm walking through this pretty well, but it's just my mom who's been most affected. You know how moms get, and my mom is a seriously sensitive person, so it has been really tough on her which I'm sorry for the trouble I gave my family)...

So I'd like to give a shout out for all the people who have been there, by visiting me or just with their prayers. My family has been a great help, and I can never thank them enough, and my friends have been incredibly supportive. I am blessed to know so many good people, really.... THANK YOU SO MUCH! Today we had family friends over who drove over an hour to get here to check upon me, because they heard I was ill yesterday and insisted to come for a visit. Really experiences like these truly make you appreciate the important things in life...

I was tagged by Ash to get the book nearest to me, and open page 161 and copy the fifth sentence. So here we go:

"My dear Watson, try a little analysis yourself,'' said he with a touch of impatience. ''You know my methods. Apply them, and it will be instructive to compare results."

From Sherlock Holmes: The Complete Novels and Stories (Volume I)
Bantam Classic