I would like to share this beautiful song with you. It's called "Namy 3al hada". No idea how to translate it.
It's just the best!!! I looooove it. Hope you like it as well. ;)

Email ThisBlogThis!Share to TwitterShare to FacebookShare to Pinterest
Labels: songs

In Search Of The Perfect Leader

I am a subscriber of The Warrior of Light by Paulo Ceolho. Every month he sends us an article, sometimes I would just read it in a hurry, because the topic wouldn't be very appealing to me or that I was simply too busy to read it. Today however, I thought I'd give it a chance.
I found it amazing. I just have to share it with you. Here it is:

In Search Of The Perfect Leader

"A reader sends me a questionnaire in which he presents the profile of three world leaders who lived in the same period of history, and asks if it is possible to choose the best one using the following data:

Candidate A was associated with witchdoctors and often consulted astrologists. He had two mistresses. His wife was a Lesbian. He smoked a lot. He drank eight to ten martinis a day.

Candidate B never managed to hold down a job because of his arrogance. He slept the whole morning. He used opium at school, and was always considered a bad student. He drank a glass of brandy every morning.

Candidate C was decorated a hero. A vegetarian, he did not smoke. His discipline was exemplary. He occasionally drank a beer. He stayed with the same woman during his moments of glory and defeat.

And what was the answer?

So what then is leadership? The encyclopedia defines it as an individual’s capacity to motivate others to seek the same objective. The bookstores are full of texts on this theme, and the leaders are normally portrayed in brilliant colors, with enviable qualities and supreme ideals. The leader is to society as the “master” is to spirituality. This, however, is not absolutely true (in either case).

Our big problem, especially in a world that is growing more and more fundamentalist, is not allowing people in prominent positions to commit human mistakes. We are always in search of the perfect ruler. We are always looking for a pastor to guide and help us find our way. The truth is that the great revolutions and the progress made by humanity were brought about by people just like us – the only difference being that they had the courage to make a key decision at a crucial moment.

Warriors of light keep the spark in their eyes.

They are in the world, are part of other people’s lives, and began their journey without a rucksack and sandals. They are often cowards. They don’t always act right.

Warriors of light suffer over useless things, have some petty attitudes, and at times feel they are incapable of growing. They frequently believe they are unworthy of any blessing or miracle.

Warriors of light are not always sure what they are doing here. Often they stay up all night thinking that their lives have no meaning.

That is what makes him a warrior of light; because he has been through all this and has not lost the hope of becoming better than he was.

It's great because I always that that way. Be it when I thought of a world leader, or simply what makes a good person in life and specially when I think of the leading character in a novel, I'm a bookoholic but bear with me. I always thought that if a writer wants to make a good character, and by good I mean the nice and good person, he needs to show us no imperfection, because that way we won't accept it as the "good" person of the novel. Very shallow, I know. I have become to realize that I'm wrong when I think that way. It's the same with life, you can't be human without having imperfections. And sooner or later these imperfections will have to show. We demand too much of people, (or novels for that matter) so these are my ponderings. I don't know if they make sense though, but I can totally relate with this issue of the Warrior of Light.

*If darkness blinds you, I, I will shine to guide you*

There are good things in life. There is a lot to be grateful for. I am just in a good mood, although tomorrow I have school and it's not going to be very pleasant hearing teachers' comments about how much classes I missed this week.
But listening to Josh Groban, and doing things for others makes it feel much much better. I would like to share two of the sources that are keeping me cheerful now.

DON'T GIVE UP (YOU ARE LOVED):


I definitely feel like posting more of Josh Groban, but those will do for today. I really hope you enjoy them as much as I do. I just love him!!! His songs just make me feel good about myself, my life and everything really. :D
by Noor @ 8:06 PM No comments: 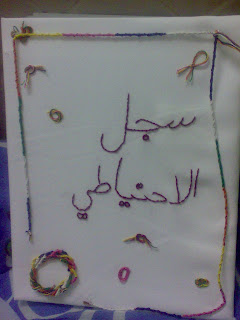 I promised Ash to show him the master piece I was working on about 2 weeks ago, I'm sorry for posting it late but here it is. It's for school, my teacher asked me to do a cover for a file for our class, she needed it to be "creative". She didn't even say 'Good job' or anything when she saw it, and she had us working the weekend on it. Anyways, doesn't matter what she thinks! I like it.... :D
So there you go. ;)
by Noor @ 7:52 PM 2 comments: