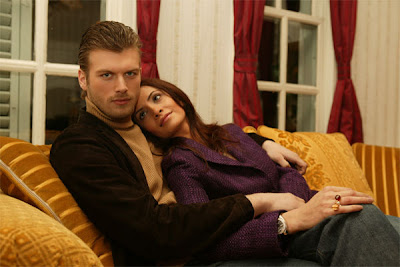 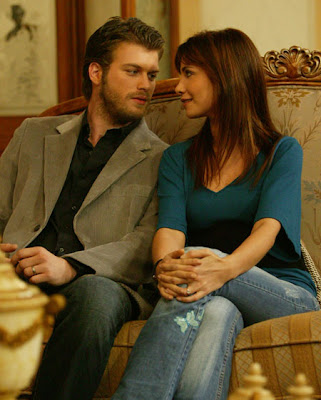 So now that they're in the island all by themselves, Mohand got a chance to talk to her. Which they cut out, I have no idea why. The show started with Mohand being upset with Noor. Anyways I think I get why, he probably tried to talk her into getting back to him but she refused so the man has had enough. He went and opened the door and said 'Noor if you wanna go, then go. But you should know that I would rather die than love someone else.'
So she was going out, but he stopped her and put his jacket around her and told her he loved her. Ahhh, that did it. So she hugged him and they're back together!!!

Such a relief... Now we can breathe easy, because they spent the weekend there, and then after getting back Mohand asked for Noor's permission to go see his son because Nehal was leaving for a while to go to the USA to get treatment. So Noor suggested him bringing his son to the house to spend the time while Nehal was away with them. He thanked her, but she said 'Your son is my son.' Now she's talking! Everything's back to normal, thank Goodness!

Now that Mohand and Noor are doing good, the show is focusing on other characters. Dana and Anwar's relationship is very rocky, because Dana is accusing Anwar to be having an affair with someone from work. Of course, Anwar isn't. But you can't blame Dana because the girl she's accusing is the cause of it all. She is the sister of Bana's husband, Suhair. (Bana is Dana's and Mohand's cousin). Suhair is so evil, she sprays her perfume on Anwar's jacket, and one day she got Anwar drunk and into her room, but Anwar refused to have an affair with her because he loves Dana very much. So she hurts herself, and calls her brother, Kamel. She even makes a mess out of her house to show the struggle. She tells her brother that Anwar raped her!!!

Now Kamel goes to the company and starts yelling at Anwar but Anwar denies it. You'd think Mohand would believe Anwar being his best friend but Mohand didn't know what to believe. I mean the girl hurt herself to show that she struggled with Anwar. Anyways, Kamal gets a friend of his who is a professional in dealing with such cases to press charges against Anwar. So he asks Suhair to tell him what happened. So Suhair starts telling the story, saying that he raped her in the living room, Kamal tells her that she told him that he raped her in her bedroom. So Kamal figures out that his sister is lying, because when they asked her how she got the marks on her hand she couldn't think of an answer.
Anwar and Dana are going to the hospital, because Dana wants to abort her baby, she's pregnant and since she and Anwar are getting a divorce, she didn't want her baby to have to be away from his father. But on the way, Kamal calls Anwar asking him to come to his place with Dana. They go and Kamal apologizes for not believing him and tells him that Suhair was lying.

Even though everything is cleared, but Dana doesn't want to get back together because she feels that there are too many troubles and problems to work out. Anyways, that's cleared the show turns to the whole company crisis. They're facing bankruptcy. So they have to sell their house. That's their grandfather's decision. They try telling him to give them some more time, but he is determined. So Noor tries to think of a way to help out. She sells her part of her company to her partner, and she transfers the money to the family's account. Now you gotta admit she's awesome. She sold out her work, what she's been doing for a while.

Anyways so things started to look good for the company. But Mohand since he doesn't like her partner asks her to come work for their company. Noor refuses of course, just because she sold her part in the company doesn't mean she left her job. But she's gonna try to help their company.

And Dana has an art gallery and it was a success but the problem was that she wasn't happy. Surprise surprise! It was because Anwar wasn't there. She goes to his house and tells him that she wants to try to make things work. So they're back together!

We'll end it there, because the show right now is pretty vague with what's going to happen next, what's the next crisis! But it's now just nice that the whole family is happy.

Here's a video of some clips of the show: