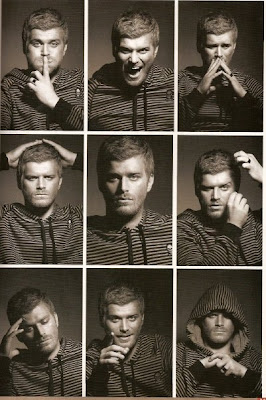 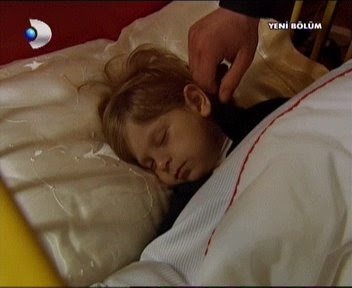 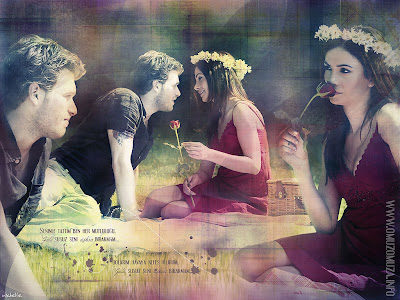 Mohand is still trying to get Noor back, so one day he goes to their bedroom at night and tried to talk to her, and he tells her that he wants her back but she just tells him to go away. So he leaves the room, but feeling very helpless he starts hitting the wall, as in punching it and it looks as if he's punching it really hard and yells 'What have I done?'
His grandfather hears him and so does Noor, so they both go see what is wrong with Mohand and their grandfather tells them to work things out between them because it's getting ridiculous. So they go to their bedroom, and Noor goes to get some bandage because his hand is injured from hitting the wall. So as she puts the bandage he tells her how much he loves her and that he doesn't want to get back together with Nehal and stuff. But Noor says 'Mohand, I lost all my family in one day so I know what it's like to live without your parents. Your son deserves to have both of his parents with him and that his parents are in love.' But Mohand tells her that even if she left him he wouldn't go back to Nehal.

Of course Mohand keeps trying and now that Noor got her driving license he got her a red car, and it's waiting for her in the house. But Noor and her partner are already looking for cars, she wanted a red one but the shop didn't have one, and her partner told her that green is better because it's already available. So she gets one and she goes to the house to find Mohand decorating the car, but she tells him she already got one. And she refuses Mohand's gift, saying that he can't make things up by getting her presents.

There's this upcoming party for business men. Mohand of course is going, his company is going down because of what happened with smuggling drugs. Even though their name is clear, their reputation is ruined. So he needs to go to this party with Noor to show the positive side of their family. Now, he asks her just a day before the party and she refuses because she's going with her partner. So when Bana finds out that Noor isn't going with Mohand she gets upset, because it's not just a party they're going to as a couple, they're representing the family so she calls Noor and gives her a piece of her mind. Now Noor doesn't know that the family's company is going through a crisis because obviously Mohand didn't tell her. Who can blame him? Noor doesn't give him a chance to say anything.

Anyways even though Mohand didn't tell her, Noor rises up to the occasion and goes with him. But you'd think things get better, well they don't...

Noor is going to Paris to open a shop there and extend her work with her partner. So when Mohand finds out that Noor is going to Paris he loses it, and he asks her when she was planning to tell him and stuff. But she just says that everyone is free to do what they want with their life. But he says 'What if I don't let you go?' And she says 'Mohand please don't make it any harder than it is'

Now one day Mohand brought his son to the house, and he went to Noor and told her to give his son a chance because she'll love him instantly and that she'll be a great mom for him. Noor agrees and goes to see the boy. She holds him but the boy starts crying!!! A really perfect moment, so Noor gives the boy to Mohand and leaves the room crying. Mohand hurries after her, and tells her he's sorry and that every time he's trying to make things better he just makes things worse.
One day, after getting out of the shower, Mohand forgets his ring in the bathroom. And goes to see his son and Nehal, so Nehal and her sister notice that he's not wearing his ring and Nehal's sister tells her that maybe he got a divorce and that it's Nehal's chance to get Mohand back.
One of the servents in the house, brings the ring to Noor and tells her that it was in the bathroom. Noor thinks Mohand let go of her, but she gives him the ring and tells him to play along until her grandmother is feeling better.

One day, Noor gets home and goes to check on her grandmother. But her grandmother wasn't in bed, so Noor goes looking for her and then comes to find her in her room. Noor asks her grandmother whether she's feeling better, and she is. Noor finds out that her grandmother was playing her and gets upset. She tells her grandmother that it's been awful having to live in the house with Mohand. So they decide to leave tomorrow morning. They go to dinner, and Noor tells everyone that they're leaving tomorrow. Mohand's grandfather says 'OK, we can't force you to stay but at least have this last dinner with us' So they all sit but Mohand gets up and says 'I don't want to be a part of such a dinner.'

He calls Nehal and asks her if it's ok to come by and give her a visit. Nehal and her sister get all excited thinking that maybe he came to tell her that he wants her back. So Mohand comes and tells Nehal that he needs her help because Noor is leaving him and he doesn't know what to do. He tells her how much he loves Noor, and that Noor can't understand the fact that he and Nehal are friends and nothing more, so he asks her to talk to Noor. But Nehal starts crying, who can blame the girl? She's in love with Mohand and here he is telling her he needs her help trying to get back his wife. So she refuses.

Mohand leaves and writes a letter to Noor, and slips it under her door. He waits for a reply or anything but nothing happens so he gets into her room to find no one there. Apparently Noor and Dana left to go out. They go to a restaurant to find Nehal sitting there. So Nehal called Dana and asked her to bring Noor because she wanted to talk to her. So they all sit and Dana leaves the two to work things out. Dana tells Mohand that Noor and Nehal are talking. Nehal tells Noor that Mohand told her about their separation.
So Noor thinks that since Mohand is so attached to Nehal he's telling her everything, but Nehal says he told her because he needed her help. So Nehal tells Noor the following:
'Since I came back I noticed that Mohand is very different. And when you look into his eyes you can notice how much he's in love. I can tell he loves you dearly. And even if you two split up we won't get back together. I hate to be the reason for you and Mohand's separation.'
So Noor says 'But you still love him right?'
Nehal says 'Love can take a lot of forms. And I can't have a man who loves someone else'

That was really good of Nehal and if that doesn't get Noor back I don't know what will. So Noor comes home, and reads Mohand's letter which is so romantic and he's pleading her not to leave him. But to ruin the moment, her partner calls her and tells her that they should go to Paris next week to arrange a few things. She agrees. Now Mohand knew that what Nehal said didn't work because he still didn't hear from Noor so he called his friend and asked him to bring the boat. You see their house is on the see. So Mohand goes to Noor and tries to talk her into getting back to him but fails so she tells him to leave because she wants to sleep because tomorrow she's leaving with her partner to Paris. Mohand says 'No, you're not. You're coming with me' And he lifts her up and carries her to the front door and gets her into the boat and they go to the island. Of course she tried to resist but there's no use. After getting in the house he locks the door and keeps the key with him. She just leaves him and goes to a room and locks herself in.
Next day, she wanders around the house trying to get out but Mohand gets back with food, and makes her breakfast. So she tries to convince him to take her back but he refuses. So she says 'I don't want to stay here with you.' So he just says 'Fine' and leaves her by herself in the room. All I thought was 'Go Mohand'. That's the way to go, it's like she has to go back to him.
Okay, well I don't know if his attempt will work, but very much hoping so. Now the episodes are getting more and more interesting because Mohand is taking great steps at making things better.
by Noor @ 12:19 PM

You're most welcome Anonymous, I'm glad to be of any help. Plus yesterday's episode was really good, finally after el muma6aleh something exciting happening. :)

I have a virus on my computer & I'm trying to get it off so I have been trying 2 download my anti virus I previously had 1 but I deleted it 2 install the 1 I got but it didn't want 2 wrk so I left it alone 4 awhile I later went 2 my system restore & restored my laptop & then tried 2 dowload my antivirus but when I do it says I have 2 delete my previous 1 I had (the 1 I deleted b4 I restored it) so when I go 2 remove it it says it can't becuz the file no longer exists. I already know y it don't exist cuz I deleted it but can someone please help me & tell me how I can remove it 4rm my add/remove programs please I hav been trying 2 remove it but it won't let me what so ever. Please help me!! [url=http://gordoarsnaui.com]santoramaa[/url]