The Diary of a Young Girl - Anne Frank 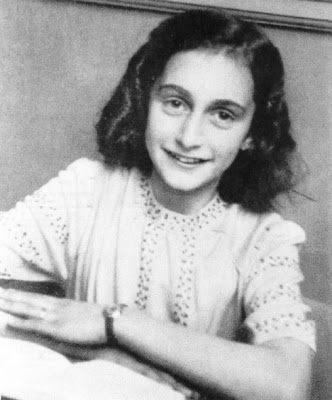 I used to keep a diary when I was 13 too, like Anne Frank. I read what I wrote sometimes and think how silly it all is, I only addressed what I did in my day and how was I feeling and it was mostly superficial, I would never go deep while I wrote it.
Anne Frank is like anyone else, she is a teenager and we all went through the same things basically, yet she writes about everything in detail and she does it so well. She described their hiding in Holland so well you can see her there. I had to remind myself several times that what I was reading is real, it happened to those people, it was hard to keep that in mind. Her diary wasn't written for anyone to read, she addressed certain issues repeatedly, not that I find that annoying; it is quite the contrary it's amazing and it is "real".
It just makes you feel miserable that you think how these people lived, and how they endured it. How it could have been stopped. She dwells on the war, and what she says is very true. One time she said that wars don't happen because governments want them to, if people were against wars then riots would happen and the people have the strength to stop a war, yet humans approve of wars because if they didn't none would happen.
That thought is very true, yet I only wonder sometimes people are afraid of their leaders, if those leaders happen to be as heartless as Hitler.

I loved the book, I loved getting inside of her head. It is a must-read for everyone. It confirms the fact that we're all alike, yet very different.

Here are a few quotes I liked:
"Up till now I always thought bickering was just something children did and they outgrew it. Of course, there's sometimes a reason to have a 'real' quarrel, but the verbal exchanges that take place here are just plain bickering. I should be used to the fact that these squabbles are daily occurrences, but I'm not and never will be as long as I'm the subject of nearly every discussion. (they refer to these as 'discussions instead of 'quarrels', but Germans don't know the difference!)
Pages 43, 44

"Riches, prestige, everything can be lost. But the happiness in your own heart can only be dimmed; it will always be there, as long as you live, to make you happy again."
Page 198

And this quote is amazing because her wishes came true, even after her death:
"I don't want to have lived in vain like most people. I want to be useful or bring enjoyment to all people, even those I've never met. I want to go on living even after my death!"
by Noor @ 12:17 AM

I notes something-by the way I like so much reading diary books- that when person wrote his diary without planing for bublish it its more honest than that one who wrote his oun to be ridden by public !

how ever i remmber The Kite runner when you were talking abou the war !its my FAV
im so exsaited to read the book !
BTW whats the full title of it noor?
maybe i coud finde it in Borders someday !!

@ Hala: It's called "The Diary of a Young Girl" by Anne Frank
Good luck with finding it at Borders, I got it from Dubai because I asked if they had it in Borders and at that time they didn't.

And The Kite Runner is one of my favourite books too! It's beyond amazing. The Kite Runner deals with the war in a different manner of course. The Diary of a Young girl deals with a family and how they face the war and how it changes their lives. It is something worth reading.