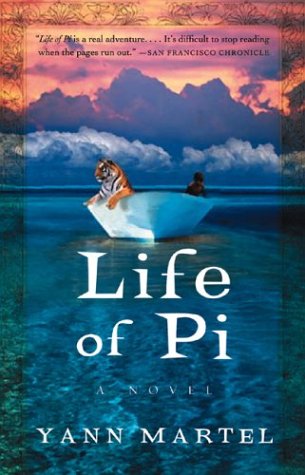 Life of Pi is an amazing book. It's very original, and has great insights on the world!!! Religion is a topic that's addressed in the book, and the author does great work with it.
I just loved it. How Pi grows, and becomes more mature. Awesome Awesome!!! I'm jealous of his name though, Pi! You know the 3.14 thingy...
I really think everyone should read this book!

Anyways. I have a nice quote to share from the book:

"So you want another story?"
"Uhh... no. We would like to know what really happened."
"Doesn't the telling of something always become a story?"
"Uhh... perhaps in English. In Japanese a story would have an element of invention in it. We don't want any invention. We want 'straight facts', as u say in English."
''Isn't telling about something - using words, English or Japanese - already something of an invention? Isn't just looking upon this world already something of an invention?"
"Uhh..."
"The world isn't just the way it is. It is how we understand it, no? And in understanding something, we bring something to it, no? Doesn't that make life a story?"
"Ha! Ha! Ha! you are very intelligent, Mr. Patel"
Mr Chiba: "What is he talking about?" (this is said by the partner of the one talking to Mr. Patel)
"I have no idea." (this is said by the one who was talking to Mr. Patel)

Uhhh..I looooved this too =DD Imma write my full review on my blog right away :D
Greatly chosen! <3