I just have to blog about this and let you know what's the latest buzz around here. It's this Turkish show that's called 'Noor'.
It's probably one of the stupidest tv shows ever, which is exactly why everyone is watching it. Well, almost everyone. I mean seriously, at my school, everyone wants to know what happened or has already seen the show. Everyone agrees to the fact that the lead actress, Noor, is pretty dumb.
Well, I'll fill you guys in with the plot of the show, here we go:
Mohand, a very very handsome guy who is the lead actor of the show, went through a difficult time, his girlfriend died and she told him just before she died that she was pregnant.
He was devastated, and his grandfather thought that maybe they could get him to meet Noor and that they'd get married. Now Mohand is very rich, because his grandfather is a very successful businessman. And Noor is one of their relatives, a distance relative but still. Anyways Mohand meets Noor, and wanting to please his grandfather, he agrees to marry Noor. But at first he tells her he wouldn't come near her or anything of that sort because he was still verymuch in love with his ex-girlfriend. Through time, Noor grows to be fond of Mohand and falls in love with him. Who could blame her? The guy is gorgeous. Anyways, he also starts to fall in love with her.
So she gets pregnant, and he has warned her against it because he's not ready yet. She doesn't want to tell him right away, but wants to wait for the right moment.
Well, I don't want to make it long, certian happenings prevent her from doing so. In the night of Mohand's sister's wedding, Noor finds out that her friend is in love with Mohand. Her friend assures her that he doesn't know. But Noor doesn't believe her, and she doesn't attend the rest of the wedding. Mohand, furious with her for leaving the wedding, comes to her and they have a fight. They were fighting on the staircase and she falls and the baby is aborted (?).
Anyways, Mohand feels terrible and he apologizes but well, I mean ok her baby was aborted and she must feel bad but she takes it to a whole new level.
Mohand understands that it was her fault, because she didn't tell him because she was afraid he might not accept it. But the guy is a perfect gentleman and he wouldn't do that.
Well, what is done is done. But Noor decides to go back to her old town. He was asleep and she just left without even saying goodbye. He tried getting her back, but even after two months she doesn't come back. Her reason for leaving was that she loved him more than anything else, and though he loved her back, his love wasn't as strong.
I know, a pretty lame reason.
Well, now she's back in town, because she got a nice job offer and Mohand finds out she's in town and goes to her hotel and that's where last night's show ended.

I don't know if these events might strike out as stupid, but if you watch it, it's depressing and stupid. Still, we watch it. A major reason is that the lead actor is very very very good looking. I have no idea where they found him but it is said that he was model of the world for a year. Now I can understand that.
Ok, enough of that. I'm sure you wanna see how he looks like: 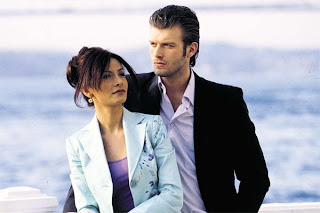 Now, yes she is dumb and all. But they have to get back together. The guy is devastated. I don't know what he sees in her but whatever.

I know you're probably thinking I'm too attached, and that it's just a show. I mean poor her, it's only her character. I mean they could have written a better part for her. She's one of the those Goodie-Goodie people. I don't know about you, but sometimes they're pretty annoying on tv shows. Being too perect and all. I mean they guy loves her and one time he tried going to her town, and well there was this party his grandfather was supposed to attend there but his grandfather couldn't. So he went and he found about the party as well, so those who are throwing the party saw him and thought his grandfather sent him when he didn't even know about it. So Noor refused to go home with him. She told her grandmother that he came for the party not for her.

I'll definitely have a few more posts about this show, it's awesome!!!

well i agree with you the series is a BIT silly but there's sth that always forces me to watch it! dunno!

I will never ever watch such a show !
noor please higher ur standards girl ! shu muhanad ma muhanad ! eft !

I don't like how the woman is always the victim, it's so frustrating! And there's always a man she's after and another one after her, my gosh!

MEXICAN SOAPS ARE SOOOO LIKE THIS :P I never watched them, thank God!*

Very complicated plot but if so many people like it, then obviously its appealing and intriguing enough :D Atleast its way lot better than "The Bold and The Beautiful" ;)

Tell me about it, the show gets on my nerves :P I mean you don't even know, who is who after sometime in "The Bold and the Beautiful" :P

and thanks for the compliment on the new template, glad you liked it :D I was too bored with the plain white template I had prior to this template :P

Hey thanks for your comment on my Einstein blog :) :P I was beggining to wonder if perhaps I should delete that blog and I decided not to :P

lol well bluetooth is another term we (as in my friends circle in Bangalore) use here to describe when something hits us or when we suddenly realise something :)

I disagree Noor is a great show with a great story.... it has never been stupid and her and muhanad belong together and if you dont like this show then shut up and deal with it!:)

Thanks for ur comment Anonymous. But don't u think everyone's entitled to an opinion?
:)