So, now there are 3 things checked in my wishlist!
The most recent being, 'Go to a concert and SCREAM'. We attended a Westlife concert last week. It was out of this world. I know I know, Westlife are so last year but they have really good songs and we used to be great fans, and now we're even more since we went to their concert, we can't help it.
I screamed my heart out, woke up the next day with a throat that really hurt but it was worth it. I felt like there was so much inside of me that I let out that day and I'm a normal healthy person again! :D 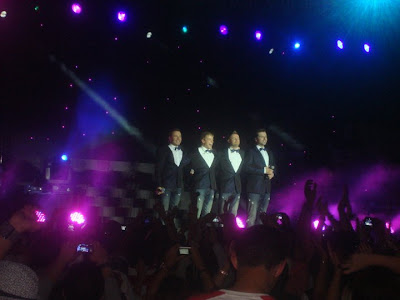 There are so many things I'd like to learn right now. I'm well on my way with 'learn how to cook' I'm not sure what the limit is, when will I be able to say I know how to cook now. I need to set a limit, because even though I keep repeating the same dishes I know. They're getting better!

Languages is something that's so far-fetched now. I still have hope though, but I don't know how much will is left!! There's that part of me thinking what's the point. I know, that's wrong but I can't help it.

I'm not sure I'll ever check 'Change the world'. I don't know why I wrote that, or I do but I suppose I'm more realistic about changing the world. It could be I'm saying that to console myself, it's not that I can't change it but who's to say I really did change it, and if I did check it will I feel that satisfaction? Will it be enough, as in I did my bit. I don't think that feeling will ever be there, and that's a good thing right?

Inshallah I'll be able to do all those things. I need more courage though, more motivation and imagination. What are some of the things on your wishlist?
by Noor @ 2:06 AM