My trip to Turkey 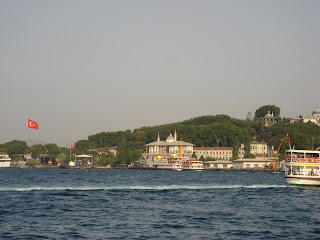 Heyyy I'm back from Turkey. It was AMAZING!! The bestest trip I've been to, I mean the country rules, the people are so nice and the weather is wonderful. You can't help falling in love with Turkey. So I'll try to tell you all about my trip. We stayed in Istanbul, which used to be the capital of Turkey but it's not anymore.

First things first, when we got out of the plane we simply knew we're going to love this place because of the weather. It wasn't disturbingly hot, or humid. It was just right. It even rained twice when we were there and one time we got soaked. But we experienced walking under the rain, I know that's something very normal for some of you but here we don't get that! And then there's the people, they're just so helpful and they can go with you all the way to where ever you want to go if you're lost. I mean the language wasn't a big difficulty. Turkish people don't speak English but you'll find a lot of them who talk Arabic. And Turkish isn't so hard to learn, throughout our 18 days stay in Istanbul we've managed to learn a bit Turkish and show off when we go to buy things. It was awesome. And that leads me to another thing, which is the shopping. My good God! Shopping in Istanbul is a must, the people there are so fashionable, I mean like really! And when you go to a mall or to a place with shops, you just can't not buy. The clothes there are amazing and you can get whatever you want with really good prices. I mean when you go there, you just bargin. If they say it's in 35 TL then you say I'll buy it for 10 TL, and you'll probably get the thing with 15 TL. It's amazing. My mom got us a kettle and a tray in 50 TL when the guy told her it was 180 TL!!! I mean that was pretty amazing.

Oh and people there are very social, and since we don't look Turkish they'll come talk to us and ask where we're from and stuff. We've had a few funny incidents there so I'll share them with you. First off, me and Huda were just walking looking at the shops, so one guy was sitting near where we were walking and he thought we were lost but when we told him we weren't he was like: Are you from Jamica? We're like 'Uh, no'. So if you've seen what we look like you'll know that we don't look Jamican, but I don't know what this guy was thinking. It was really hilarious. Most of the people there thought we were from Iran which is understandable. But Jamican? And another was like 'Are you French?'. I mean that's just really funny!

And we got more than 5 people asking us whether we're Muslim. We wear Hijab, and that indicates we're Muslims. And they funny part is that those who ask whether we're Muslims turn out to be Muslims themselves! But the incident which topped it all was when we were walking in the grand bazaar, which is a huge market with about 4000 shops and really amazing, and there was this guy sitting down and he said something like 'Ahhhhhh' very loudly when we were passing by so we like turned around and looked at him confused, so there comes this other guy who is probably his friend and says to him 'What are you an animal?' and then talks to us and says 'I'm sorry, he's not normal.' So we just shake it off and go on walking until the dude who said Ahhhh says 'I love you'. And we turn around and see him looking at us and we just keep walking but we laugh all the way out of the bazaar. Poor dude, he tells us he loves us and we just laugh at him! But that was sooooo hilarious...

Oh and the coolest thing ever was (ok it wasn't the coolest thing but from the coolest stuff because there were sooo many awesome stuff it's hard to choose the best thing) the fact that now we've been to Europe. Because you see Istanbul has two parts; the Asian part and the European part. We've stayed in the European part but we visited the Asian side as well. It's just really cool. I'VE BEEN TO EUROPE! NANANANA (Ok, allow me to be childishly excited :P ).


Coming to the transportation part, if you're in Istanbul, don't ever go to places in a taxi because it's very expensive. Instead you have a lot of options, the coolest way to move around the city has to be the tram. It's on the main road and it can take you to a lot of places and it's super cheap. Then you have the buses, which are also cheap but you have to know exactly which bus to take because there are tonnes of them, but if you ask anyone, they're surely going to help. And then we have the boats, they're so great. Like you enjoy the sea and they're very comfortable and very cheap. ;) We had a blast moving around Istanbul, sometimes when we didn't know where we're going to go, we just go on a boat and let it take us somewhere new.

Now going to Turkey just for site seeing is awesome, because there are just a lot of places to see. First off I'll take about the mosques. Most of them are from the Ottman era, and they're so beautiful. We have the Blue Mosque or it's called the Sultan Ahmet mosque. It has six minartes and from the inside it's huge. It's very beautiful: And just across it there's the Ayasofia museum which used to be a mosque but they turned it into a museum. Actually they built it for St. Sofia and so it was a church and inside it you can see pictures of Jesus and Virgin Mary on the walls, but she converted into Islam so they turned it into a mosque and so you can see writings that say Allah and Mohammed on the walls which is just so very cool. I mean having things that represent both religions. It's a really beautiful building: 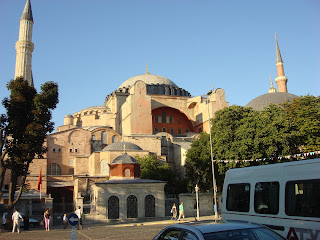 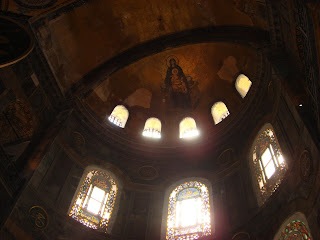 There's also a lot of other mosques we've been to and they're all so beautiful. Now we've been to this place called Thermal which is in a city named Yalova. Now Thermal is just a place for tourists. It has a lot of hot springs and the hot water that comes from them is very useful for the skin, the eyes, the stomach. Like each spring is useful for something. And there are a lot of trees, and the place there is just wonderful: 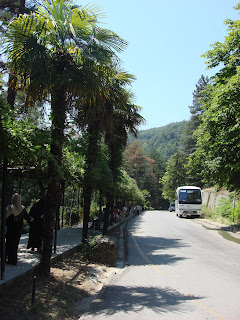 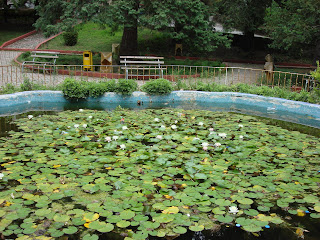 Then we've been on the telefrek (or however it's spelled) in Bursa. We went by the telefrek to the top of a mountain which is more than 1200m high. So the weather was chilly but it was just beautiful. And what's really cool is that the resturants there give you your own BBQ stuff so that you can grill meat and chicken, it was yummy. Here are some pictures: 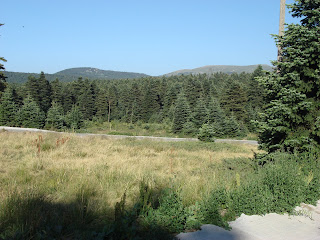 And one of the coolest places we've been to is this place called Minia Turk, which is the world's largest city with miniatures of famous buildings in Turkey and there are some from other countries. It was really so cool, like there were places we couldn't go to in Istanbul or in Turkey because they were far so we saw exact miniatures: 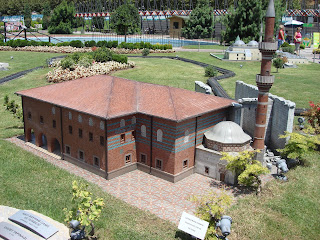 So the trip ruled big time, and when we were there we were very much hoping to see Yahya (from a Turkish tv show called Snwat el daya3) or Mohand from Noor. Then it got to the point of wishing to see anyone from these two shows but well it didn't happen. So that's the only regret. But we're definitely planning on going there again sometime. Oh and Turkish guys are cute!! But we didn't hook up with anyone, I mean it's a little too early for that :P Just kidding!
by Noor @ 12:49 PM

Awww you had a blast, habibti! The pictures are wonderful, there's SHOPPING, cute guys...! It's a complete trip!

Hey the post was great and the photos are so beautiful, and you have been to Europe! YAY!!!!!

Mez Loved the post !
it is the bestes trip review I've ever read !
=D
I second Vic , it seems like a complete trip ! too bad u didn't hook up !
b3deen LOOOOL @ the I love u guy !
hehe

Very nice description! BUT AgiaSofia is a greek-orthodox (Christian) church built during the Byzantium. Instanbul (greek word In stin Poli = in the town) was the capital of the Byzantium Emperior. The church was turned into a mosque in 1453 not because AgiaSofia converted but because Turks invaded the city. The church underwent major destroys, paintings in the walls were covered with cement because Islam didnt allow to show human bodies. It also was burned at some point..There were another 2 orthodox churches nearby that were completely burned. I'm sad not because of what happened but also because tourists often are said distorted stories...My family originates from there...